A Spanish company leads the global fight against climate change

A Spanish company leads the global fight against climate change

The emergency caused by climate change is one of today’s greatest problems. The threat is no longer looming in the future. It is already here, and is affecting every facet of our lives. Some people, organisations, and governments have decided to do more than merely stand back and observe the effects. That goes for companies too, particularly those which are deeply committed to stopping the current escalation that is endangering the future of our planet.

The global number one is Iberdrola, a Spanish company that has been firmly committed to green energies for decades, according to British think tank Influence Map, which has published its latest analysis of influence and leadership in climate policies. Iberdrola tops the ranking of the global companies with the greatest involvement and the most ambitious climate policies on the so-called “A-List of Climate Policy Engagement”.

The company chaired by Ignacio Galán is reaping the rewards of a 20-year commitment to fighting climate change, investments in renewables and compliance with the Kyoto Protocol when nobody believed in it. These days, the whole world understands the wisdom of this strategy, which has made the company a global leader in wind power and an international giant in green innovation. 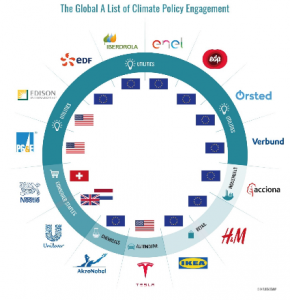 Climate ambition for a better world

After Iberdrola, companies also present in previous years’ reports have made the list, such as Unilever (U.K., Netherlands), Nestlé (Switzerland), Enel (Italy), Tesla (US), IKEA (Netherlands), EDP (Portugal), and AkzoNobel (Netherlands) which have all continued to advocate for ambitious climate policy in their respective jurisdictions. This year’s A-List also adds Edison International (US), EDF (France), Verbund (Austria), and H&M (Sweden), which rose from the 2018 list of Potential Leaders, as well as Acciona (Spain), Ørsted (Denmark), and Pacific Gas and Electric Corporation (PG&E, US).

The utilities sector appears to be the most active and positive on climate policy overall, particularly in Europe, whereas only one company from the automotive sector – Tesla – makes the A-List. This report also highlights a handful of companies such as Johnson Controls in the industrial sector which do not meet all the criteria for A-List or Potential Leader status, but which stand out in their sector for relatively positive climate advocacy.

The fact is that climate change affects us all, so all initiatives to curb it are welcome. Perhaps some day we will be able to envisage our children on a better planet, with fewer fossil fuels, better air quality and greater respect for the environment.