East Anglia: One of The World’s Biggest Offshore Wind Farms 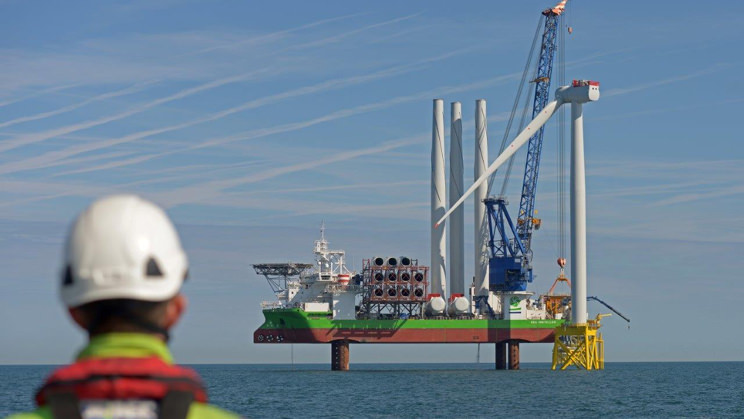 East Anglia: One of The World’s Biggest Offshore Wind Farms

East Anglia ONE is the largest renewable energy project undertaken by Spanish company Iberdrola ever. With an installed power capacity of 714 MW, the £2.5 billion project will provide clean energy to nearly 600,000 British homes from 2020 on.

East Anglia ONE will be the world’s biggest offshore wind farm once it begins running in 2020. Located in the North Sea about 43km off the coast of Suffolk (UK), the project will be yet another demonstration of Iberdrola’s steady commitment towards the fight against climate change.

On June 22, after ten years of work and development, the first turbine of the project was installed. This is a milestone that marks the beginning of the last phases in the construction process of the wind farm.

The turbine installed is the first of 102 Siemens Games 7MW wind turbines. It is composed of 75-meter fiberglass blades, tower sections and nacelles (the head of the turbine) which are all being pre-assembled at Peel Ports Great Yarmouth, a company that falls in line with Scottish Power Renewables’ mission to empower the local industry. Each element has been on view on the Great Yarmouth seafront while the towers are being assembled on the pier.

Siemens Gamesa has also manufactured the first blade for the project’s wind turbines. Made of fiberglass as well and measuring about 75 meters long (that’s equivalent to the wingspan of an Airbus A380), the task required 850 people to produce the first 306 blades that will sit at its center.

The £160 million blades are being transported from the Green Port Hull plant along the coast to Peels Ports Great Yarmouth where they will pre-assemble components of the turbine. A total of £5 million will be invested in order to find facilities that will be fit for the task.

The substation began crossing from Puerto Real on August 4th and traveled 1,333 miles to reach British waters. Over the course of the next few months, 60 engineers will work around the clock in order to complete the installation of the equipment needed to commission the substation.

The Andalusia II offshore substation will act as the nucleus of East Anglia ONE,  collecting the electricity produced by the wind turbines and transforming it from 66 kV to 220kV. The electricity will then be transmitted through the marine cable and then to the earth, minimizing potency losses along the way.

Over the next few months, a total of 42 foundations, each raising to 65 meters tall, will be installed with 126 piles and other components. This will be the second time that Iberdrola has delegated these two companies to develop components at their facilities in Spain. Construction of these components will require one million hours of work creating an average of 800 jobs that will employ as much as 1,300 people.

The Port of Lowestoft has been chosen to carry out the monitoring of the East Anglia ONE. The port will become a new cutting-edge operations and servicing base filled with specialized offices and storage areas. The building will require an investment of £25 million and will help support the offshore construction phases of the wind farm.

Once complete, East Anglia ONE by itself will provide full-time employment for about 100 people, however, with the support of its customers, ABP’s Ports of East Anglia, King’s Lynn, Lowestoft and Ipswich, the entire project will contribute £340 million to the UK economy each year and support about 3,500 jobs in the region and 5,000 nationally.

Iberdrola’s flagship project is a first in the industry, here are some of the most relevant details about the project: