Renewables, good for people, good for the planet… and good for investors

Renewables, good for people, good for the planet… and good for investors

Clean, emission-free energy, the latest generation technology, green employment, a brake on climate change…. The advantages of renewables are beyond all doubt. And added to these positive environmental aspects is their performance as investments on the capital markets.

The companies most strongly committed to green energy are posting outstanding performances on the stock exchange, showing that renewables are profitable for people, for the planet and for investors.

In a context in which every company is now claiming to be aiming for sustainability, the best returns on the stock exchange have been posted by the pioneering companies that first made a commitment to clean electricity generation technologies more than twenty years. Such is the case with Iberdrola, one of the global leaders in the sector, for which 2019 was its best year on the stock exchange since 2006, outperforming the global indices and the utilities sector.

The Spanish multinational has combined its long-standing commitment to wind and hydroelectric energy with international expansion and management acumen. Not for nothing has its executive chairman Ignacio Galán been named among the world’s top five CEOs by the Harvard Business Review.

Iberdrola is the world’s leading corporate issuer of green bonds, most of them associated with projects involving renewables. In 2014, it became the first Spanish company to complete a green placement, and since then it has issued green bonds to the tune of €9.5 billion. In Spain, in 2019 alone, Iberdrola concluded an agreement for green financing with the EIB and ICO (Spain’s state finance agency) for the Núñez de Balboa photovoltaic project and a green loan from the EIB for the development of the Cavar onshore wind farm complex. 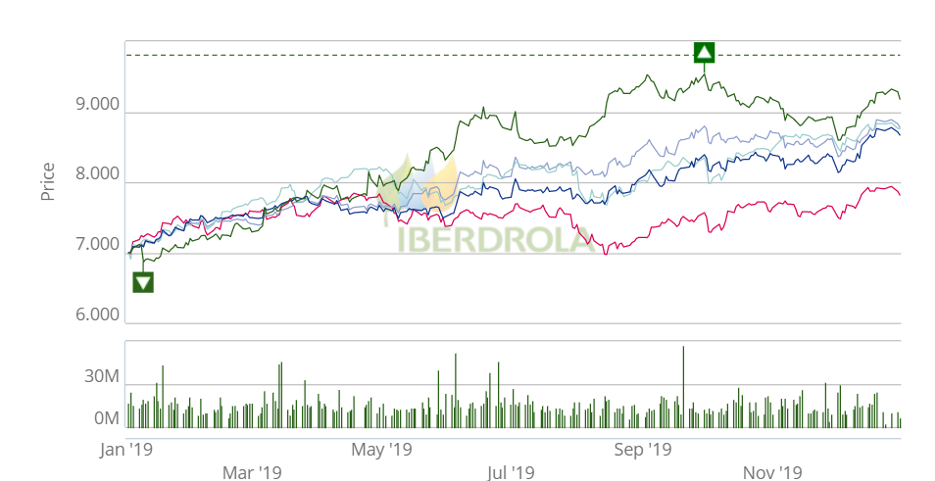